Do we all share the same future as Greece? 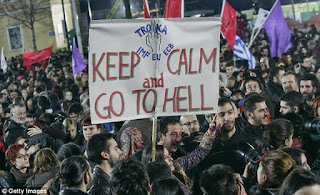 A psychotic dynamic plays out

Headlines today often refer to the phenomenon of the 'bankrupt nation'. It's a jarring mental abstraction. A pure accounting term is being applied to civil society and the complex web of economic activities of a people who exist within any particular national boundary. The spectre of wages being cut in half, public servants being laid off en-masse, interest rates on housing and business loans climbing through the roof, children going hungry, etc.

On the other hand, an incredible juxtaposition is revealed as private banks, whilst in reality being functionally bankrupt, are 'bailed out' by the very societies now described as insolvent!

Such a form of global psychotic dynamic would prompt a reasonable observer to try to find out what is really going on? Clearly sources of international finance have become much more important than either the viability of national economies and the lives of people who live within them. How did this extraordinary situation occur?
Nations on the global periphery - the 'subprimers' - are being loaded with more and more debt

Citizens of nations such as Greece, Ireland, Portugal and Spain, those that tend to be on the global economic 'periphery' are subject to deep austerity measures as greater and greater levels of debt are being loaded onto their governments's respective 'balance sheets'. Why this is happening is a long story that is difficult to articulate. Much evidence points to a playing out of the inherent defects of the social relations inherent in global capitalism itself. The functional structure of our exchange relationships have been rigidified into patterns of practice and thought that largely benefit a small global elite (whilst threatening the biosphere that ultimately sustains us). Our lives have become organised around the artificial creation of wants. Production is defended as satisfying those wants and production, in turn, creates wants. As JK Galbraith warned decades ago, the more amply an individual is supplied the less urgent is the need for such goods, with longer term implications about the sustainability of demand for such goods. A 'squirrel wheel' of want creation and production for wants - all justified on the basis of the creation of jobs - has been promoted whilst many fundamental human and environmental needs are still largely dismissed. [1]

As the 'squirrel wheel' turns on the global scene nations get to be either creditors (with a trade surplus) or debtors until this game of monopoly comes to its predictable conclusion. The ultimate demise of export-dependent economies, like Germany for instance, is that purchasing power dries up in the trade-deficit nations that Germany sells to. Those countries, then, can no longer buy Germany's exports. Whatever happens after that point is reached losses will probably be forced on both sides. The burden of debt is simply too great. 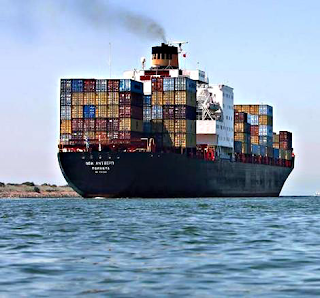 Financialisation
In the 1980s a process of 'financialisation' in the world economy stepped up. Satyajit Das, an Australian former banker, and current author and academic explains that over the last several decades economic growth "has been based increasingly on rising borrowings and financial rather than real engineering. There was reliance on debt-driven consumption. It resulted in global trade and investment imbalances, such as that between China and the US or Germany and the rest of Europe." [2]. However strong evidence points to these imbalances being mirrored in the unequal world distribution of key and vital resources such as oil in the first instance.

Even as early as 1964 - the year world oil discoveries peaked - the global market for securities (the Euromarket) grew immensely from around this time. Huge sums of unregulated short term capital began to flow in and out of national boundaries without effective constraints. A destabilisation of the values of currencies occurred around the world as a consequence.

Historically, then, the rise of global debt could be seen to be linked to the inability to increase the amount of oil available per head of population since the late 1970s.

It is not surprising that, coinciding with the beginning of this long-term energy plateau, there was a reversal in the ratio of US savings to investment.

"Up till 1980 [4], US investment was financed from internal savings, which always exceeded investment. This reversed in 1980 and savings from then on fell behind investment." [4] 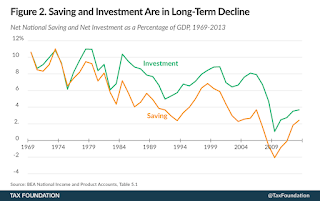 "High energy prices translate into reduced consumption. There may be no increased productivity. Workers may simply work longer hours."[6]
'An Age of Discontinuity'

Some two decades late, in 1982, an Australian politician, Barry Jones, published a book [7] with the intent of alerting people to 'An Age of Discontinuity' - 'a post-industrial era' that had begun. Jones said that forces at play such as oil and general resource depletion, sharply escalating world population growth, local scarcities, great technological change, consumer society, etc had created a situation where nations experienced much greater international interdependency in order to function. The influence and power of national governments had greatly reduced whilst mobile transnational corporations were taking advantage of new technological and arbitrage opportunities for cheaper labour, finance and resources 'somewhere else'.

Mr Jones most emphasised in his book 'Sleepers Wake' the new and capital/energy intensive technologies that emerged in the 1970s and 1980s. They had become 'labour-displacing' rather than 'labour-complementing' in their nature. As a result manufacturing no longer existed as a dominant employer with many countries then in the process of 'de-industrialising' and moving to largely service-based economies instead. But service jobs were also being replaced by computerisation and modern telecommunications technologies.

Human services, of course, are an essential component of any economic system. A formal service-based economy, however, depends upon the reliable and ample flow of the basic and essential provisions of life, such as food and energy. If they have to be imported national purchasing power is necessary. On the other hand, energy producers need a minimum price to sustain production levels; and that minimum price needs to grow as energy-intense fuels get harder and harder to reach.

It's not surprising that, in this context. investment became sourced through other means such as debt, downsizing, greater productivity, taking shortcuts through deregulation and other forms. Rent seeking became increasingly dominant.

How, then, are we to continue life on a consumption-based 'squirrel wheel' in a world where there are not only fewer paid jobs, but a sharply decreasing resource base to sustain them? How are nations to obtain adequate levels of foreign exchange to sustain an industrial economy? In the final chapter Jones posed a generic and thoughtful (if partial) solution:

"Redefine work as 'any form of activity or time use that is or may be beneficial to society and/or to the person performing it'. Income should be re-defined to include 'acknowledgement of the right to receive economic support' in addition to 'reward for work done'.

At present our incomes are shrinking and the global financial system, as we've known it, is falling apart. How, then, are national governments going to provide real incomes (real purchasing power) to its displaced industrial workers in the post-industrial context. In this, our crisis epoch?

Without dramatic change in our financial institutions and in our daily patterns of belief and action, Jones' solution sounds like another way to simply perpetuate a state of bankruptcy. Sustainability requires the reversibility of dire global trends, not an adaptation to them.

[4] Figure 2 in Alan Cole's article: 'Losing the Future: The Decline of U.S. Saving and Investment' dated October 01, 2014, shows that investment rose above savings earlier than 1980. This rise in 'investment' funds was likely the result of the 9 fold increase in oil prices that occurred in the 1970s.
http://taxfoundation.org/article/losing-future-decline-us-saving-and-investment

[8] Charles Derber in his 1998 book 'Corporation Nation' quotes former US President Rutherford B Hayes about the 'Gilded Age' he lived in: "This is government of the people, by the people and for the people no longer. It is a government of corporations, by corporations and for corporations." Derber observes of our contemporary reality "[Corporations "constant dialogue] is more than idle chatter: their intricate network of connections constitutes what is, in essence, a new worldwide corporate web." Page 18.
Posted by Myrtle Blackwood at 11:09 PM